Acne is the most common skin condition.

Η Acne  is a medical term that defines diseases of the hair follicles and sebaceous glands of the skin. The type of acne that occurs in adolescence is not a serious health problem. It significantly affects the appearance, while it can also cause permanent damage (scars), this type is called common acne. Acne is the most common skin condition. 70-95% of adolescents have acne especially on the face and upper torso. Acne mainly affects people in the age group of 15-18 years. In most cases after puberty it subsides on its own, and in a percentage of 2 to 7% it leaves significant scars.In 10% of cases, the disease persists until about the 25th year of life and only 10 to 30% of patients require drug treatment. 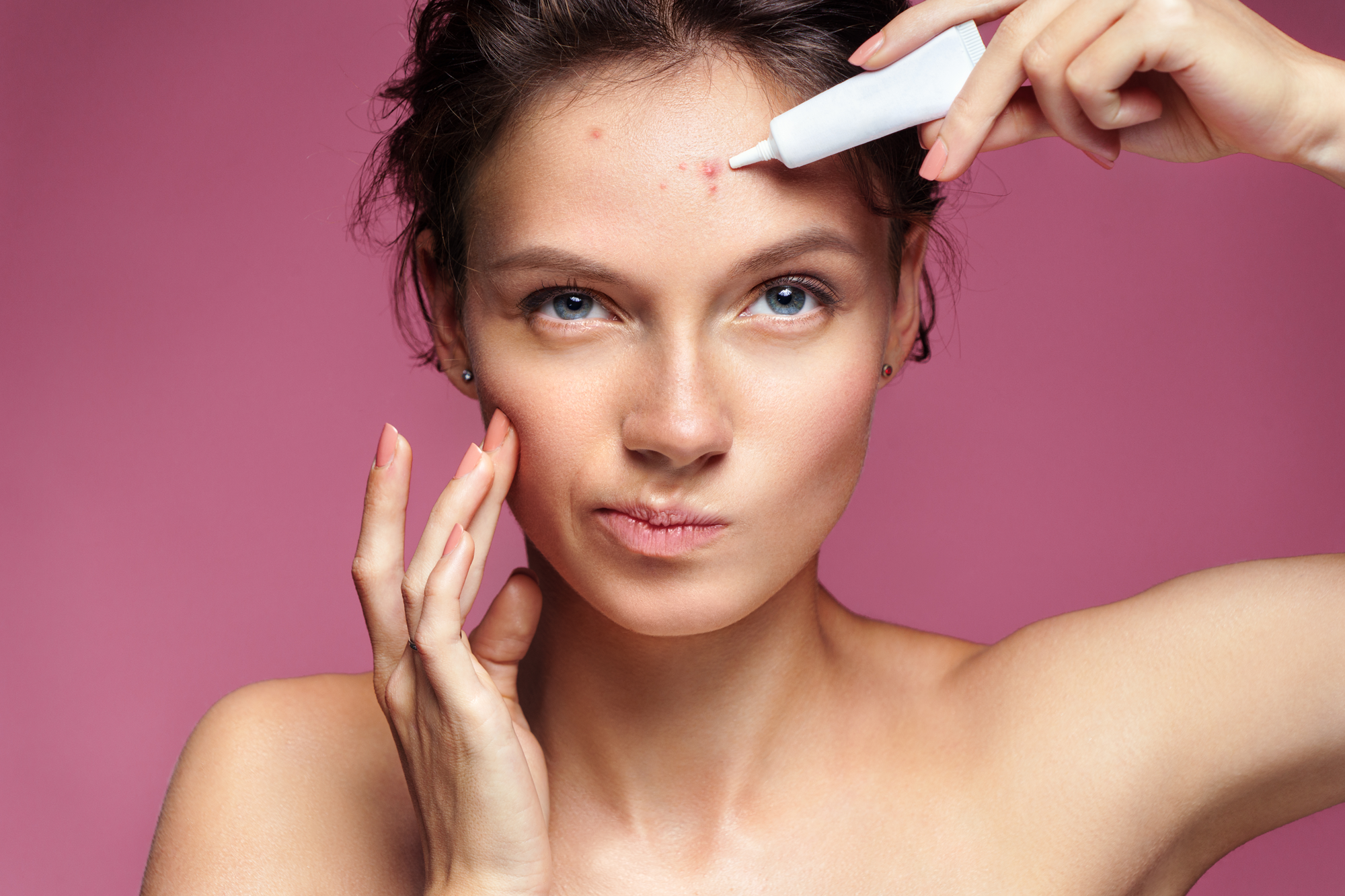 Due to the increased production of sebum (seborrhea) and disturbance of keratinization, at the exit of the sebaceous glands are formed pharynxes (keratin pistons). Their inflammation creates "pimples". Acne is a multifactorial disease with a genital predisposition. Studies in homozygous twins have shown similar acne lesions in 98% of cases.

Bacteria: Recent research suggests that the onset of inflammatory bowel disease is not due to the colonization of Propionibacterium acnes. Nevertheless, the bacteria in the affected area are involved in the inflammatory process.
Androgens: Androgens stimulate the growth of sebaceous gland tumors, as well as keratinocyte proliferation and the formation of follicular hyperkeratosis.
PPAR: Human sebaceous glands are rich in PPAR. Among the various PPAR subtypes, PPARs are involved in regulating lipid synthesis.

Due to their properties, phagocytogenic substances found in cosmetics prevent the exfoliation of keratinocytes and promote the formation of pharyngitis.
Smoking: studies have shown that cigarette smoke contains high levels of arachidonic acid and polycyclic aromatic hydrocarbons. From these begins a pathway of stimulation of the pro-inflammatory action of arachidonic acid.
Stress: The stress hormone CRH promotes lipid production and the conversion of DHEA to testosterone. It remains to be seen to what extent this affects practice and whether the finding opens up new therapeutic approaches.

Acne inflammation can be associated with redness, swelling, itching and tenderness. In larger inflammations there is a risk of lymphadenopathy, headaches, fever and sepsis. Inflammatory forms of acne are associated with scarring. In addition, the psychological burden causes social problems to those who are affected, because it is perceived and stigmatizes you. In addition, phobic disorders, nervousness, relationship problems and bullying of those affected by the social environment have been observed.

This method was developed by Dr. Tzovaras Stefanos and is applied exclusively in our clinic. It is a combined application of dermabrasion and phenol peeling in a single session. The method was developed out of the need for a really effective treatment for acne scars, as the usual methods (fractional laser, RF, TCA) are ineffective. This method can be applied with the same success in photoaging of the face, smoky wrinkles. The results of the application are superior to mechanical dermabrasion

Detailed instructions are given to each patient according to his problem. For patients from abroad there is the possibility of staying close to the clinic for the required period until departure

Except for mild cases of acne, the treatment is done by a dermatologist. We have at our disposal various medicines and supportive treatment methods. Medication seeks to reduce sebum production, normalize keratinization, fight bacteria, and reduce inflammation.

Alpha hydroxy acids: Alpha are naturally hydrated "fruit acids" and act as keratolytics. In the treatment of acne, glycolic, lactic, malic, citric and mandelic acids are used. eaters. In most cases, a 3-month treatment is necessary. Unlike treatment with benzene peroxide, retinoid or salicylic acid, the use of alpha hydroxy acids does not cause epidermal water loss. Peeling every 2 weeks with 30% glycolic acid is also very effective. Acids:

Antibiotics to fight the bacteria that colonize the sebaceous pockets and later the inflammatory lesions of acne. Antibiotics can also reduce inflammation and indirectly treat keratinization disorders. A distinction is made between topical creams and systemic antibiotic pills.

Benzene peroxide (BPO): acts as a powerful oxidizing antibacterial and phagesorolytic. There are preparations in dilutions of 2.5% to 10% such as a gel, cream or suspension for washing. A higher BPO does not necessarily mean a better result, and can cause severe skin irritation. Allergic reactions occur in 10% of cases and the drug should be discontinued.

Hormones (only for women):involves the administration of anti-androgens that affect sebum production and keratinization disorders. The synthetic estrogen ethinyl estradiol is used, in combination with a synthetic progestogen that has antiandrogenic action (cyproterone acetate, drospirenone). These preparations are used simultaneously for contraception.

Linoleic acid: A 1998 study showed that applying topical linoleic acid cream for one month reduced the size of microwave ovens by almost 25%.

Retinoids:For mild to moderate acne, topical application of retinoids is offered. These include tretinoin, isotretinoin, adapalene and tazarotene. Retinoids act mainly keratolytics. Side effects include itching, burning and redness of the skin.

Isotretinoin systemically: In severe and persistent cases of acne, the retinoid isotretinoin can be used systematically. This permanently reduces sebum production. Side effects can include severe skin peeling, dry skin, hair loss, nosebleeds, depression, joint pain and even liver damage. Pregnancy should be avoided during treatment and for a few months afterwards. The pill is used to ensure contraception during systemic treatment with isotretinoin.

Phototherapy: Treatment with sunlight or ultraviolet radiation is controversial. Although UV radiation has antibacterial activity, on the other hand it multiplies hyperkeratosis. In addition, there may be phototoxic effects, especially when topical medications, sunscreens and cosmetics are applied concomitantly.

Salicylic acid: Aromatic β-hydroxy salicylic acid has keratolytic and antibacterial activity. At concentrations of up to 2% the salicylic acid contained in cosmetics, achieves only a superficial "peeling". Only in concentrations above 5% it has a phagosorolytic effect. In large areas and at higher doses required to treat acne scars, there is a risk of kidney damage.

Zinc is an essential trace element for the human body. The pathogenic mechanism of acne and wound healing processes can increase the patient's normal needs. If these needs cannot be fully met by diet, zinc supplements are needed to treat acne. However, chronic overdose should be avoided because it causes copper deficiency and as a result the appearance of hypochromic anemia. In the topical treatment of acne, zinc compounds are combined with the antibiotics erythromycin and clindamycin. Topical antiseptic, zinc oxide, is a component of zinc ointment, which can be used alone or in combination with an antibiotic to treat wounds.

The association between diet and the incidence of acne has not been scientifically proven. Some metabolic diseases are due to poor nutrition and can cause acne or at least adversely affect it. These include cases of PCOS due to poor nutrition and hyperandrogenism causing acne. Elevated blood sugar levels, as in the case of untreated diabetes, cause bacterial colonization of the skin and with subsequent inflammation worsen a pre-existing acne. 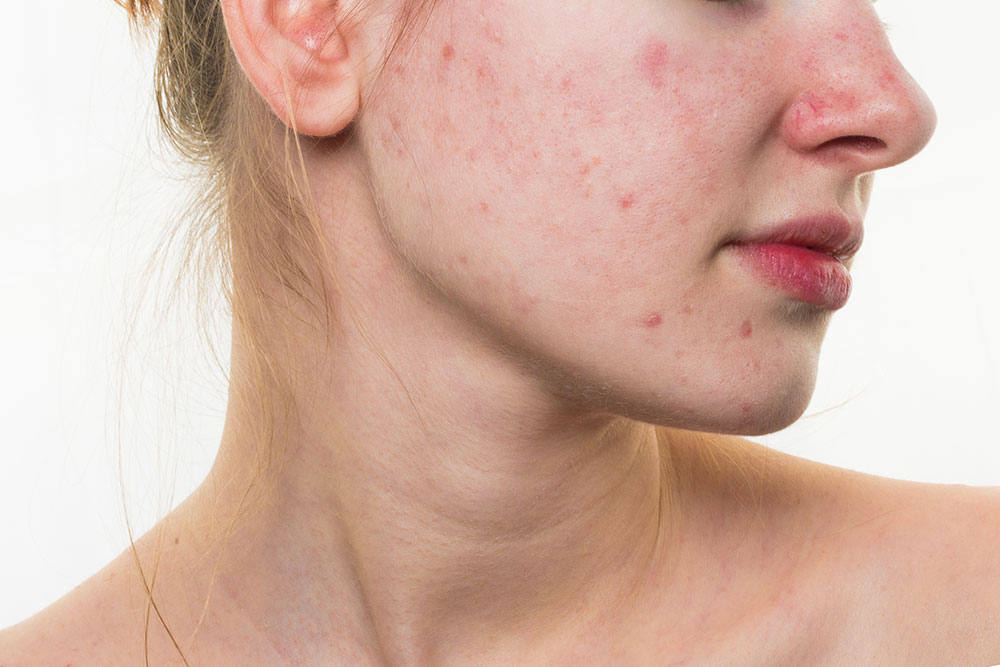 "We need to break the pimples."
Αυτό should only be done in exceptional cases and by trained staff. Can cause  Wound enlargement, abscess, infections, and additional scars.

"Acne is caused by foods that the body does not tolerate."
Acne is not a symptom of an allergy, nor is it a symptom of food intolerance.

"Acne is hereditary."
Common acne is a multifactorial disease with a genetic predisposition. There are hereditary factors that predispose to the disease, such as seborrhea and the nature of the sebaceous glands. Acne itself is not inherited.